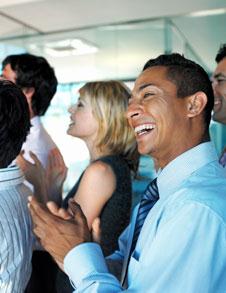 Although it is a while now since I heard this presentation at an event for HR practitioners, it is something that I believe is still worth a read as the message will never go out of date. It was an event titled ‘The Learning Organisation – Real life stories’ and two organisations were present to explain how becoming a learning organisation had worked for them. The first organisation was in the public sector and their story was one of non-monetary success. It was however the second organisation that blew me away – a small business unit of a multi-national organisation. This business unit manufactures their product from recycled materials in a very non-sexy traditional business.

In two and a half years the business moved from being a rules driven command and control structure to a values driven learning organisation, where everyone shared their knowledge and worked collaboratively. The real success however was measured in monetary terms: a 100% increase in market share and an increase in profit of £7.5m in that period. The head of the business talked passionately about what had been achieved through this change in culture.

The reason for making the change was quite simply for the business to still be there in the future. The company had seen so many organisations go to the wall and they didn’t want to be one of those. The staff initially didn’t want to change. They were quite happy being told what to do. The managers had to learn how to communicate with each other and to become more self aware to encourage the culture of learning. It was very difficult for the command and control managers to develop the ability to ask questions and listen to the answers, but they persevered and a philosophy of appreciative enquiry was adopted. Employees had spent so much time defending their position that they didn’t have time to be creative. This was addressed as the organisation moved from a hierarchical structure to a flatter structure. Senior people went back to the floor and in-house experts shared their knowledge. Different people were asked to lead on projects, which encouraged a coaching culture and knowledge sharing. As the business head explained “Everyone wants to succeed. No-one wants to be a bum – we make them that way’”.

The culture moved from one where people knew what to do, to one where they actually did it. Reflection was encouraged after action and everyone was encouraged to consider what could be done differently. Out of the seventy staff at the start of this process, ten left, which meant the increase in profitability was achieved with less people. Meetings were almost completely removed, as the need for discussion became less. A half hour morning meeting to agree objectives for the day became enough. Everyone became focused on what they had to do and got on with it.

So this is living proof that a learning culture works. A 300% increase in profit, a 100% increase in market share, and what’s more, they had a load of fun along the way. We believe that every organisation should unlock the potential of its people. We challenge all our readers to increase learning and knowledge share with their organisation, by opening their minds to the benefits.